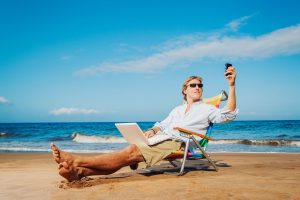 Retirement is usually viewed as the goal or reward after a long, successful career practicing dentistry. For most dentists, the average retirement age has crept up to around age 67, up from a few years ago. Many of us may dream about the luxury of an early retirement but aren’t sure it’s financially possible. Some dentists may not even know if a full retirement at any age is possible.

With the right spending and saving strategies during your working life, as well as favorable circumstances, early retirement in your 40s can be an achievable goal.

How to Retire Early

The easiest way, and at the same time the hardest way, to have options for an early retirement is to make good financial choices throughout your dental career. That begins early on, but it’s never too late to adjust spending patterns. Dentists who are able to comfortably retire early can have anywhere between 25 to 50 times their living expenses saved up, with 25 times being the number that many experts point to. To make this possible, it’s important not to overspend.

The other part of the equation is paying off debt early, from practice loans and student loans to the house, cars, and so on. When money isn’t going to pay expenses, it can go in retirement and investment accounts instead. This is often where some dentists are able to maximize their salaries and make early retirement a real option.

Finally, anticipate income in retirement. Unless you pursue part-time dentistry or another recurring revenue stream, all the income will be drawn from retirement plans, investment accounts, and/or passive income from real estate, for example. Set a realistic budget and factor in required minimum distributions for certain plans. Don’t forget to account for the impact of recessions or economic depressions if a significant amount of assets are invested in the stock market.

Working with a team of advisors you trust to look out for your best interests and help guide you is imperative, especially while you’re busy running your dental practice full-time.

Although the common belief is that expenses will go down in retirement, for many retirees the total costs are about the same. You will still need to pay for utilities and food, for example. The rule of thumb is to have enough money to replace 70 to 80 percent of pre-retirement costs, but some dentists and their families may need more if they plan to travel or have pre-existing health conditions.

In retirement, perhaps the biggest upfront cost will be health care. For healthy adults and families, this can often average several hundred dollars a month. One study indicated that a third of retired households actually spend more during the first six to eight years of retirement, mostly due to rising healthcare costs. And as we age, long-term care becomes even more important, and costly – to the tune of $45,000 per year for assisted living or $85,000 to $97,000 for nursing homes. Purchasing long-term care insurance before you retire is one way to fend off some of those costs. It’s important to consult experts in that field and do your own research so you’ll know what your options and costs are.

Aim to pay off the mortgage on your house, as this can be a huge drain on retirement funds. Some dentists who retire early find that it’s useful to downsize to a smaller home that will cost less to maintain.

Travel is another common expense for early retirees. Consider that in addition to the costs of travel itself, you probably will need to pay for extra healthcare coverage or travel insurance for each trip.

One last note about retirement expenses, don’t forget to factor in taxes. Certain IRA and 401(k) withdrawals are taxable income, as well as some Social Security benefits and other revenue streams.

Is Early Retirement for You?

Even if early retirement is financially possible, it can be hard to know if it’s the right choice. Relationships with immediate family members will change, you may miss work, and finding value in retirement may be a challenge. Other dentists have found it helpful talking to family and friends, doing independent research, and reflecting on personal goals and influences before making the decision to retire early. Make sure to involve your advisory team early so they can point you in the right direction for planning and resources.