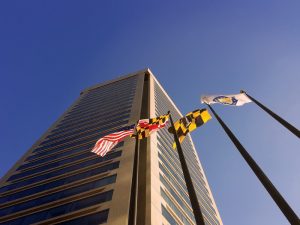 The U.S. is in the midst of what some are calling a global trade war. Macroeconomic policies have far-reaching impacts to individual states and local economies, and many in Maryland have been considering the impact of tariffs and trade tensions on the state economy.

It began with steel and aluminum. In March, the Trump Administration leveled 25 percent and 10 percent steel and aluminum tariffs against the European Union, China, Mexico, and Canada. Since then, Canada and Mexico were granted exemptions until the North American Free Trade Act (NAFTA) is renegotiated. While the move was meant to give the United States more of a competitive global edge in what some have seen as an economic disadvantage for decades, there are negative consequences that businesses at home are preparing for. The question is, how will Maryland be affected?

Among states that import steel and aluminum, Maryland is among a small handful of states whose imports are about double the national average. Steel and aluminum imports represent more than five percent for our state. Industries like manufacturing and construction will see higher input costs and potentially limited import markets, depending on where they source materials and what retaliatory measures are put in place.

It’s not just steel and aluminum, however. Since March, trade tensions with China have worsened. Recently, the U.S. levied a 25 percent tariff on $34 billion worth of Chinese exports, with an additional $16 billion in tariffs in the works. As a result, Maryland’s agricultural sector could see a big hit.

Soybeans are the largest crop in Maryland, representing 500,000 acres and more than $230 million in the state economy. Soybeans are also the largest U.S. agricultural export, and China bought most of them. Soybean futures dropped by 14 percent in June, the largest loss in four years. The long-term impact is hazier, as Brazil, the world’s largest soybean shipper, cannot meet China’s soybean demand on its own.  And there are other countries where soybean cargoes can be switched for delivery, which is already happening. Still, Maryland soybean farmers remain nervous.

In addition to agriculture, county-specific programs could be impacted. It’s estimated that exported recycling and waste, solar power, and opioids will see an effect from Chinese trade tensions. In retaliatory measures, China instituted a foreign waste policy that prohibits the import of certain waste materials. Although this policy took effect before the steel and aluminum tariffs, China is still the largest importer of recyclable materials. As a result, local landfills and recycling programs may see higher costs to collect recyclables.

Some in Maryland are cautioning too focused of a response on Chinese trade tensions. They point out that Europe is the biggest U.S. trading partner, and the biggest importer of Maryland goods.

Recent bipartisan legislation in the Senate is attempting to require Congressional approval before additional tariffs are levied. The current resolution is considered a small step, as trade negotiators would be free to disregard Congress’s guidance – but the point is to give Congress a role in the process.

Many industries in Maryland are affected by the back-and-forth tariffs between the U.S. and China, as well as Europe. As business advisors, Naden/Lean is staying on top of trade war developments for our clients in affected industries so we can better guide business and tax strategies. If you have a question about how these policies may affect your company, contact us here.