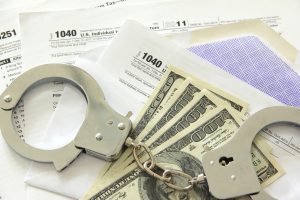 Tax fraud happens year-round, but during tax season fraud scams are at an all-time high. With every tax season comes an increase in tax fraud occurrences. Sometimes taxpayers themselves are to blame. Unscrupulous paid tax preparers can also be responsible for inflating deductions and falsifying returns. And of course, fraudsters do their best every tax season to take advantage of thousands of people who are just trying to file their taxes on time and minimize any amount owed.

Now that tax season is in full swing, here are the top 12 scams to look out for this year, according to the IRS.

Phishing scams use email, text messages, websites, and social media to pretend to be the IRS in an attempt to steal personal information. These types of scams have been on the Dirty Dozen for years, and while scammers use increasingly tech-savvy techniques to fool taxpayers, a fair amount of common sense should also be used to avoid giving away sensitive information.

Don’t fall victim to aggressive behavior or threats of criminal prosecution or fines by anyone claiming to be an IRS agent over the phone. “Vishing” (voice phishing) is more common during tax season and targets victims’ money or personal information.

Fraudsters try to steal social security numbers, financial account information, or IRS taxpayer ID information to file fake returns. Scam tactics often change and become more sophisticated, and cyber-crime is growing. Since 2015, cases of identity theft are down due to increased enforcement, but it remains a top threat.

Beware of anyone who claims to get you a refund higher than average, doesn’t provide a copy of the filed return, or deposits refunds into his/her account first, before taking out a “fee.” Scammers target the elderly, low-income, and individuals who are due a refund.

The most common items that taxpayers (or scammers) falsify are charitable contributions, medical expenses, padded business expenses, the Earned Income Tax Credit, and Child Tax Credit. When it comes to claiming charitable deductions, remember that donations to GoFundMe and similar campaigns are not tax deductible.

It is illegal to file false informational returns such as 1099s or W2s in an attempt to claim erroneous tax credits. Self-employment income or wages are often inflated or made up entirely in attempts to claim tax credits like the Earned Income Tax Credit. Income can also be fraudulent if a scammer suggests reporting mortgage or credit card debt payment options on a 1099-MISC.

Organizations masquerading as official charities seek to scam well-meaning taxpayers out of their money. These fake charities use various methods to conceal their true identity, like playing off similarly named legitimate organizations and websites. Also beware of where your money goes when organizations claim to collect donations immediately after major natural disasters. If you’re unsure about a non-profit’s reputation, GuideStar is a free service that monitors non-profit performance and can help you make informed decisions about where your charitable dollars are going.

The research credit cannot be used after production, when updating an existing product or process, on foreign research, or customer-funded research. Qualified expenses are limited to in-house wages and supply expenses and a portion of contractor payments. The research credit can be widely used in many industries, but to properly claim it, be prepared to back up qualified research activities and record-keeping requirements with research expenses.

Foreign bank accounts and offshore investing is not inherently illegal. Big problems arise when taxpayers use certain offshore accounts to hide money and avoid paying taxes. Offshore tax evasion can also include trusts, employee-leasing schemes, private annuities, or insurance plans. The IRS has stepped up audits of offshore accounts, so if you maintain one, make sure you follow the proper reporting requirements or independently disclose income to avoid steeper penalties and fines.

What constitutes frivolous? Try one of these arguments as prime examples, all from the IRS website:

It seems ridiculous, but the fact that this is one of the top 12 tax scams tells us that enough people try to claim these arguments that their inclusion on this list is necessary. Taxpayers who are caught filing frivolous tax returns will be fined $5,000.

Otherwise legal tax arrangements like trusts, captive insurance, and conservation easements rely on their complexity and promises of to sell taxpayers into using them. Foreign trusts would be set up with the purpose of concealing who assets belong to or transaction details. Some illegal forms of captive insurance companies use micro-captives as a way to exclude taxable income for closely-held businesses. Finally, syndicated conservation easements attract investors into illegal schemes by saying the investor may be entitled to a share of a charitable contribution deduction that equals or more than 2.5 times the amount invested.

All tax shelters should be reported to the IRS and reviewed by a trusted and competent tax advisor prior to signing on the dotted line.

How do these compare to last year’s Dirty Dozen? Here’s a link to 2018’s top tax scams.

In our next post on tax fraud, we’ll give you advice on recognizing and avoiding fraudulent tax schemes. Although common sense can go a long way, sometimes also knowing the signs of potential fraud and where it happens most can help protect your money and identity. If you’re unsure about something or think you might have been a victim of tax fraud, contact your CPA and the IRS here. Contact Naden/Lean with any questions.